The finance ministry Mr.Ishaq Dar has planned to announced current budget for the coming year 2017-18 in the 1st week of June 2017 (5th June 2017 Friday) in the parliament of Pakistan.

According to different websites, other source of information and social media showed that budget may be present in 1st week of June 2017 after final approval from parliament. But Pakistan Federal Budget 2017-18 updates from Islamabad it may be announce before Ramadan on 26 May 2017  Mr.Ishaq Dar Finance Minister is developing federal budget for the year 2017-2018 increase in salary packages, allocate budget for different Government departments in Pakistan as steel mill, PIA, Railway and others economic situation challenge. The finance budget describe the criteria how much percentage increase the pension of govt retired employee, and tax matter because the now a day’s people are develop our business by illegal way and government decide how to find out those people how have hidden business.
To find them govt decide increase in withholding tax on every banking transaction, and all the payment must be made through banking channel which more than Rs 50000. Also discuss in budget about the transportation business which is in boom it decide that the percentage of withholding increase from the previous year for collect much revenue.
Federal Budget 2017 to 2018 of Pakistan discussed mostly on every platform at fbr.gov.pk. The Finance Department of All provinces including Punjab, Sindh, Balochistan, KPK and AJK

PM Mian Muhammad Nawaz Sharif had the authority to revise the government employees scale revised because scale revision is before 03 years later now this year more chance to revision of scales in Punjab Assembly Budget 2017-18 Pakistan.

Pension increase project is already running because he is increase all allowances of pensioners include in these allowances are medial, retired civilians, house rent, transport, dearness, rent and clothing and many other allowances add up in this fiscal year Punjab Federal Budget 2017-18.

According to Dunya News 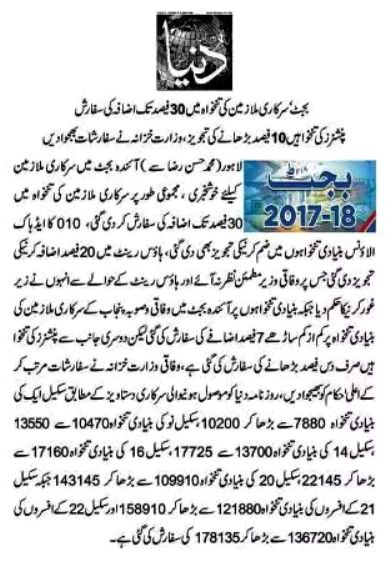