Thursday, 28 May 2020
You are here: Home Legend MM Alam on his 3rd Death Anniversary

Legend MM Alam was our hero. MM Alam complete name Muhammad Mahmood Alam was born on 6th July 1935 in Calcutta, India and belonged to a well educated family. Later on his family migrated from Calcutta, India to eastern Bengal (East Pakistan) in 1947 . He joined then RPAF (currently PAF) in 1952 as commissioned on 2nd October 1953. 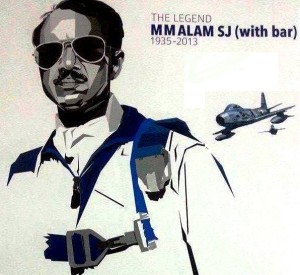 In 1965 Indo-Pakistan War was took place between April to September 1965. During a one mission on 7th September, 1965 Great MM Alam fire five Indian aircraft in less than a minute, and last four within 30 seconds, with total of nine aircraft downed in the war.

The legend having still Guinness World Records for hunt 5 fighter in less than one minute.